Four Winners Named in 2017-18 Utah District
Metropolitan Opera National Council Auditions
Christopher Oglesby, Miriam Costa-Jackson, Arielle Nachtigal, and Addison Marlor were named winners of the 2017-18 Utah District Auditions of the Metropolitan Opera National Council (MONC) held in Salt Lake City on November 11, 2017. The competition included 27 singers and was held in Libby Gardner Concert Hall on the University of Utah Campus. Each of the four Utah District winners received a cash prize of $1,000 and will compete with the winners of the Colorado-Wyoming, Arizona, and New Mexico districts at the Rocky Mountain Regional auditions on Sunday, January 28, 2018 at 1:30 PM in the Newman Center at the University of Denver. 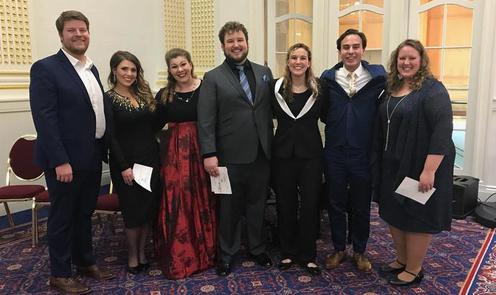 Addison Marlor
The MONC Utah District Auditions are supported in part by the Utah Division of Arts & Museums, with funding from the State of Utah and National Endowment for the Arts. Additional support is provided by the residents of Salt Lake County through the Zoo, Arts & Parks (ZAP) Program, the Salt Lake City Arts Council, BYU Broadcasting, and the University of Utah School of Music.